An annual list is released by Forbes, and it includes all the highest-paid athlete’s names in the world, and most people who follow and studies the list often wonder why it contains only a few golfers. It is a bit discouraging on the one side since none of the golfers makes it to the top 10, which is also surprising as golfers earn huge incomes and have not been able to reach the top 10 earners positions. In 2017 Rory Mcllroy did make it to the 6th place, but now even he has moved way down to 26th. Could it be that their earnings don’t qualify them and that most of their money comes from endorsements?

Tiger Woods featured 16th on the list of highest-earning athletes worldwide and earned $43.3 million in the last year of which $42 million came from endorsements.

Phil Mickelson ended up 22nd and earned a total of $41.3 million and was followed by Jordan Spieth earning $41.2 million while the 26th place belonged to Rory McIlroy earing a total of $37.7 million.

The game of golf has transitioned from the Tiger Woods era to what it is now called, the post-Tiger Woods era. There is no individual star leading the rest in the game, however, there are several younger players who are now enjoying massive growth and higher incomes from winnings and endorsements. The second-youngest earning the big bucks is Jordon Spieth, with the eighth-youngest being Justin Thomas and the 29-year-old Rory McIlroy is in 26th place on the world’s biggest earning sportsman.

In most sports when referring to the best or most paid athletes on the Forbes list have a maximum window of making their millions of 10 years, whereas the top golfers have at least another 20 years and with Thomas, Spieth and McIlroy already featuring on the list of top-earning sports stars they have room to massively increase their incomes as they will only get more established, which means more endorsements will follow. 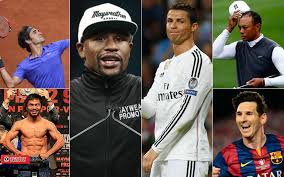 The recently released list by Forbes places Floyd Mayweather as the highest earning athlete with his earning totalling $245 million of which $275 million is the boxer’s salary & winnings and his endorsements are worth $10 million.

The second highest earner position belongs to Lionel Messi, earning a total of $111 million of which $84 million is his salary and winnings and he makes $27 million from endorsements.

Both the second and third position belongs to soccer players and in the 3rd position is Christiano Ronaldo earning a total of $108 million of which $61 million is his winnings/salary, and his endorsements are valued at $47 million.